The Chora of Naxos
Naxos' Chora is the capital and port of the island. White Aegean houses, old stone mansions, narrow streets and arches are the characteristics of the settlement that stretches around and inside the medieval castle of Sanoudos. Naxos Town is an alliance of the ancient, medieval and modern element.

The Town of Naxos (Chora)

From the visit to Portara, the enormous gateway to the temple of Apollo, and the tour of the medieval narrow streets of the Castle, to the delight of local dishes and the all-night dancing under the sounds of the latest summer hits, Chora can satisfy all tastes.

It provides all the services that a visitor of the island may need, as well as a lot of activities so as to never get bored, no matter how many times you come back! Swimming, sunbathing, horseback riding, scuba diving, day trips to nearby islands, wind surfing, kite surfing, sailing, climbing, cycling, playgrounds, courts, water slides ... the list is never-ending!

Portara
Portara (in greek it means "The Big Door") is indissolubly linked to the island of Naxos. It is located on the island "Palatia" at the entrance of the port of Naxos. It consists of 4 pieces of marble weighing 20 tons. It was not used for the purpose for which it was constructed, that is to provide entrance to the temple of Apollo, due to the fact thatthe temple's construction remained incomplete. However, since 530 BC and for approximately the next 2,500 years, it has served a completely different purpose: to welcome all the visitors of the beautiful island of Naxos!
Portara
The construction of the temple of Apollo dates back to the 6th century BC, when the tyrant Lygdamis started building it in an effort to present an equivalent, if not better, temple than the one of Olympian Zeus in Athens, built by the tyrant Peisistratus, and the one of Hera in Samos, built by the tyrant Polycrates. But after the fall of tyranny in Naxos, the temple remained incomplete. All around the monumental gate, traces of the foundations of the temple that was never completed can be found.
The foundations of the temple of Apollo
This place, the Palatia island, is also associated with the mythical hero Theseus, who, according to mythology,abandoned Ariadne here. Theseus had "grabbed" Ariadne, while leaving Crete after the murder of the Minotaur. Still, according to mythology, when one of the gods of the ancient Greeks, Dionysus, saw Ariadne, he fell in love with her and abducted her with the help of his companions in order to make her his wife.

Portara
Today the visitors can reach Portara through a paved path. If you are visiting Portara around the time of the sunset, you can enjoy one of the most charming sunsets in Greece! For us, the Naxians, it is even more breathtaking than the famous sunset of Santorini! Visit us to see for yourself!
Sunset at Portara
The Castle of Naxos

Naxos' Castle is a live medieval museum with a unique atmosphere. Passing through its gates, the visitor is transferred to another place and time where calm, narrow streets, internal courtyards filled with flowers and old mansions dominated. The gates of the Castle are three: Paraporti, the southern gate, which is the main entrance of the Castle, the northern entrance, the famous "Trani Porta", and another one southeast, the Piso Paraporti.
The Castle of Chora
Entering the castle from Trani Porta, you will see on the right the Tower of Della Rocca Barozzi, one of the oldest towersof the castle which houses the Venetian and Folklore Museum. In the museum the visitor can find old furniture, heirlooms, as well as contemporary paintings and sculptures that the museum hosts from time to time in various exhibitions. Next to the Venetian Museum is the Tower of the Crispy, the only one that survives out of the twelve towers of the Castle that were built in medieval times in order to protect it.

Today, the tower functions as the Byzantine Museum. Moving towards the main square of the Castle, you can see the Catholic Metropolis, a medieval building with marble floors and the tombstones of the most important Catholic families who lived on the island for the past five centuries. Right behind the Catholic Metropolis is located Panagia Theoskepasti.
The Castle of Chora

The church is a double-temple. The one aisle (right) belongs to the Virgin and the other one to Agia Anastasia Pharmacolutria. It is probably the oldest monument in the Castle. To the east of Panagia Theoskepasti, near Piso Paraporti, is the Monastery of Kapoukion.

Figurines at the Archaeological Museum of Chora

The uphill road leads to the Archaeological Museum of Naxos, a museum of great interest with thousands of years of history hidden within. It has been housed since 1973 in a five-storey old mansion of Chora's Castle, the former Commercial School where Nikos Kazantzakis studied for a year. The museum's exhibits come from Naxos and the neighbor islands of Keros, Donoussa and Koufonissia, dating back to the Neolithic Age (4th millennium BC) until the Early Christian period (6th century AD).

Ancient pottery at the Archaeological Museum of Chora

Apart from the famous figurines of the Early Cycladic period, which can be compared to those of the National Archaeological Museum, its archaeological collections also include remarkable examples of ceramic pottery, gold, silver and copper giftware, objects of the Roman period, sculptures, parts of statues and sarcophagi , brass weapons and tools, etc. On its atmospheric terrace, located at the back of the building, the visitors can marvel at the mosaic floor depicting a semi-naked female figure riding a sea monster.
The mosaic of the rooftop
Opposite the Archaeological Museum is the School and Monastery of Ursuline. 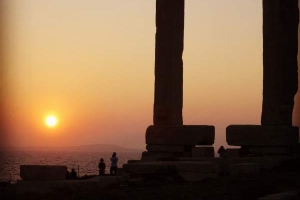 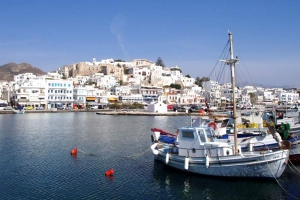 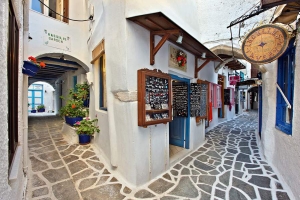 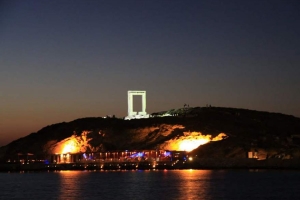 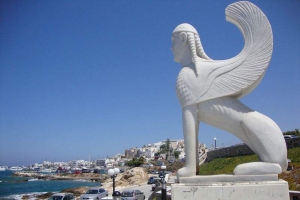 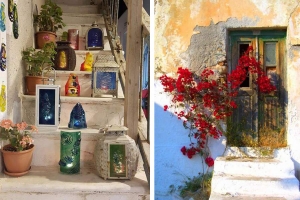 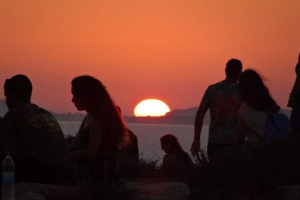 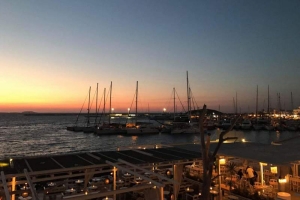 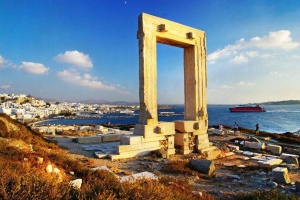 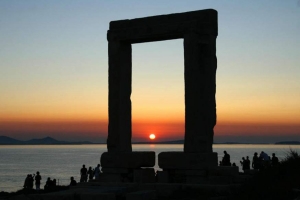 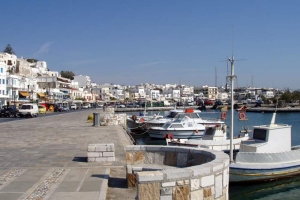 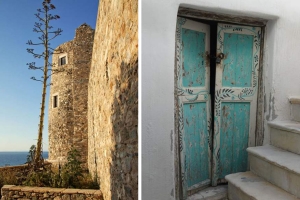 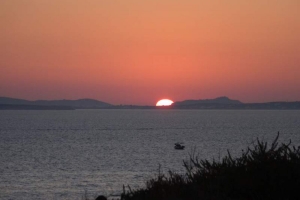